Ok, so before I get started, I have to warn you that this is a somewhat technical post (hence the name, “Nerd Notes”).  Since I’m a technical guy by training, I have a built-in (though not quite morbid) curiosity around data.  The stuff below is not for the faint of heart if you are averse to technical matters, but if you persevere you may find it useful.  What I’m going to try to explain is how you can analyze your shooting habits using real data.  Why in the world would this be useful?  Read on.

After a few years trying my hand at photography, I found myself feeling confused about what the right focal length was for me to make my images.  Should I be shooting at 18mm?  35mm?  50mm?  75mm?  300mm?  As a result of my confusion, I found myself buying lens after lens on eBay, only to try one for a few days and put it on a shelf, telling myself I’d use it again someday.  Eventually, I ended up with a shelf full of prime lenses, an 18-30mm wide angle, a high quality 24-70mm, and a 70-200mm long lens.  Over the next few years, I shot and shot and shot, and one day I realized that I rarely ever took the 24-70mm lens off of my DSLR.  But since that’s a pretty bulky lens and a hefty kit to carry around on the street, by that time I’d also purchased a point-and-shoot camera, a rangefinder camera with more lenses, and accessories for those as well.  I was new, and this was getting expensive; especially considering the fact that I wasn’t making any actual money off of my photography (yet).

As a quick aside, from my teen years until my early 30’s (before bad knees and photography came along), I was a pretty good basketball player.  Without exaggerating as a shooter, on some days I was exceptional.  But one thing that was perhaps both a benefit and a liability in my hoop game was that I was probably a little too analytical.  Even in random pickup games I was interested in my own shooting and defensive tendencies and those of whoever I was playing against.  Is he right or left handed?  Does he jump off his right or left foot?  Is he impulsive enough to fall for a pump fake?  Are his arms long enough to catch me on a reverse layup?  I didn’t have actual data at my disposal, but man, I wanted to know.  I’m old now, so I don’t care nearly as much anymore; I just go in the gym and shoot around until the young fellas show up.

But as I transitioned from basketball to photography and faced a creative dilemma over what focal lengths suited me best, I similarly sought to analyze my shooting tendencies.  Knowing that each digital image produced something called EXIF (aka “Exchangeable image file”) data, I figured there had to be an easy way to see all of the focal lengths that I’d shot at over those first few years.  Beyond that, I thought it would be helpful to understand what focal length I tended to shoot at most, both for my best, “keeper” shots and for everything else.

As a longtime Adobe Lightroom user, that was the first place I looked.  There are ways to search on, edit and even delete EXIF and metadata, but I couldn’t find a simple way to just create a single list that showed EXIF for all of my images.  After a bit of Google searching, I found a tool (on MacOSX, but also available on Microsoft Windows) that ran independently of Lightroom, creating a list file (called a “.csv”, or Comma Separated Value file) that I could then import into a spreadsheet (in this case, Microsoft Excel).  Let me show you how (WARNING: Here’s where things get a little nerd-knobby; feel free to jump to the conclusion if you feel nausea):

Sorry, Charlie Murphy.  I was having too much fun.  Anyway, after you hit Enter, you’ll see the calculated average focal length for every image file that you selected for analysis.  In my example, I’ve just analyzed over 500 images shot in 2015 and learned that, on average, the focal length I used was “37.6447106”, which in practical terms is rougly 35mm. 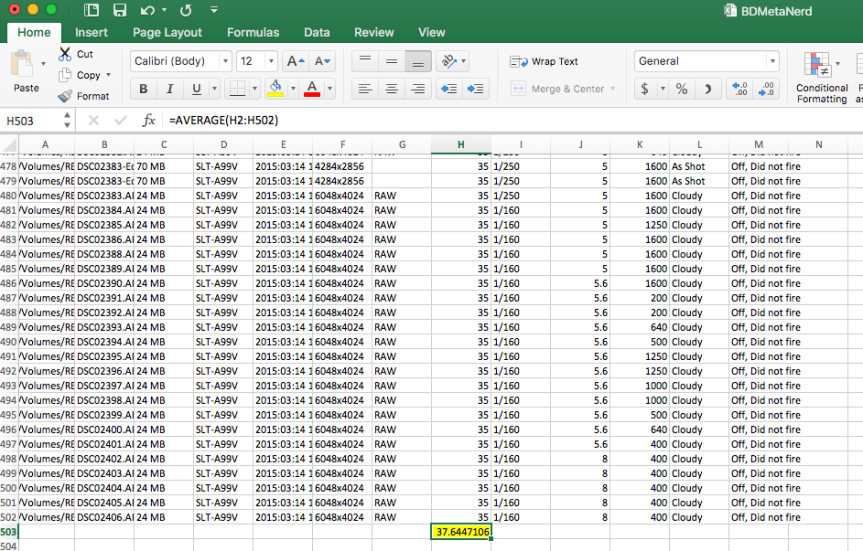 What did I learn from this exercise, and how did it help me? Long story short (TOO LATE!), I learned that I was wasting my money buying lens after lens when what I most often gravitated to usually fell in the 35mm range.  Making an assumption of plus or minus a few mm, for me that meant that I could probably be pretty happy with just a couple of lenses.  So, in 2015 I sold off all of the extra DSLR lenses, with the exception of a 50mm, a 35mm, and a 24mm.  For what I like to shoot, these three prime lenses pretty much cover all of my needs.  As a result, when I head out to shoot these days my decision on what to pack is pretty simple, and I’ve re-invested the money I spent on those useless lenses elsewhere (DRONES!!!).  I also now have a pretty powerful deterrent from buying whatever the newest, hottest lens on the market may be: hard proof that over time, no matter what choices I have available to me, I was most comfortable and effective within a specific range.  Anything beyond that range was essentially a point of diminishing returns.

This reminds me of Barry Schwartz’ Paradox of Choice; that, giving ourselves too many choices may be both expensive and counterintuitive to the creative process.  If you’ve read this far, congratulations.  It means you are at least thinking about whether you have your own paradox of choice, whether your challenge is creative blockage or an urge to purchase more kit that you may not use.  You don’t have to build a Rube Goldberg machine to get to a decision, as perhaps I’ve done here.  But, giving some thought – whether qualitative or quantitative – to your choices may very well empower your creativity in the long run.

Made in Detroit. View all posts by brianday